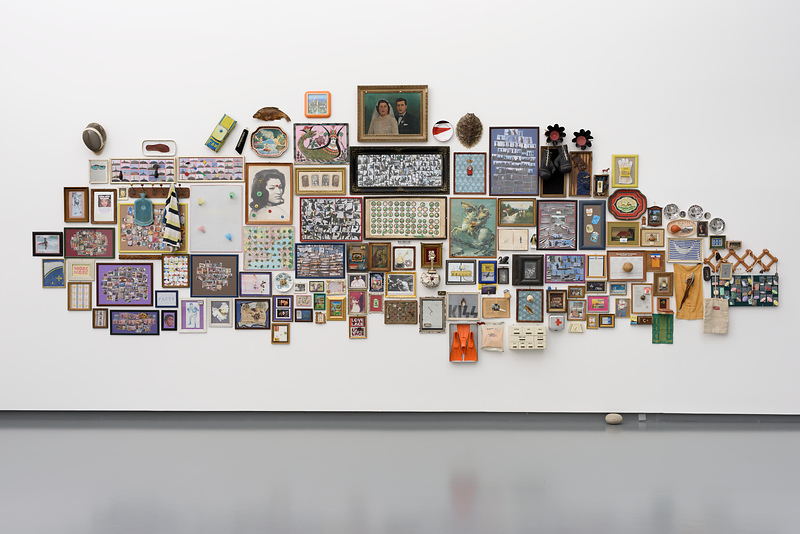 DESCRIPTION
The artwork by Alptekin is a three-dimensional wall collage, containing 136 elements which are all fixed separately to the wall. These elements are all small compositions in themselves, containing found objects, toys and frames with photos or images. Many parts consist of plastics of different origin and age.

‘Self-Heterotopia, Catching Up with Self’ is related to the concept of Heterotopia of the philosopher and social theoretician Michel Foucault. Foucault wrote: ‘The heterotopia is capable of juxtaposing in a single real place several spaces, several sites that are in themselves incompatible.’ This work by Alptekin could also be understood as a form of self-exploration. (Exhibition text, 2013). With Self-Heterotopia Alptekin seems to have developed a way to visualize knowledge about himself situated in the world.

Hüseyin Bahri Alptekin (Turkey, 1957- 2007) studied art philosophy and sociology in Ankara and Paris. The installation Self-Heterotopia, Catching Up with Self consists of objects and visual materials which Alptekin collected over a period of 16 years during his many trips through Asia, Africa and South America. Every object contains different stories and reveals Alptekin’s attention for and curiosity about the world. At the same time they are objects for him behind which he conceals his own memories and documents his life in a certain way.

CONDITION
When the artwork was acquired in 2008 a number of plastic parts already showed signs of ageing. Some elements have been restored. The material ageing of each plastic item will determine decisions about future storage, restoration or replacement.

Exhibition and Storage
For exhibition all 136 elements are hung on the wall in a set arrangement. The hanging requires a bespoke solution for each element. A small frame or plate can be hung from a point of suspension, while small, light-weight objects without hanging system are stuck to the wall with Velcro. Depending on the situation (type of wall) hanging systems may be replaced or adjusted.

In storage each of the 136 elements lies horizontally on a system board in an individual compartment, lined with museum foam. The boards are placed in a Eurocontainer (metal container on wheels). In this way gravitational forces on parts and construction of the objects are limited to the periods of exhibition.


RECOMMENDATIONS FOR PREVENTIVE CONSERVATION
The large number of different plastic parts poses a challenge for conservation. One approach is to store similar plastics together under suitable conditions. For example, all rubber objects could be sealed in a low-oxygen atmosphere. Click on the plastics for recommendations for their preventive conservation.