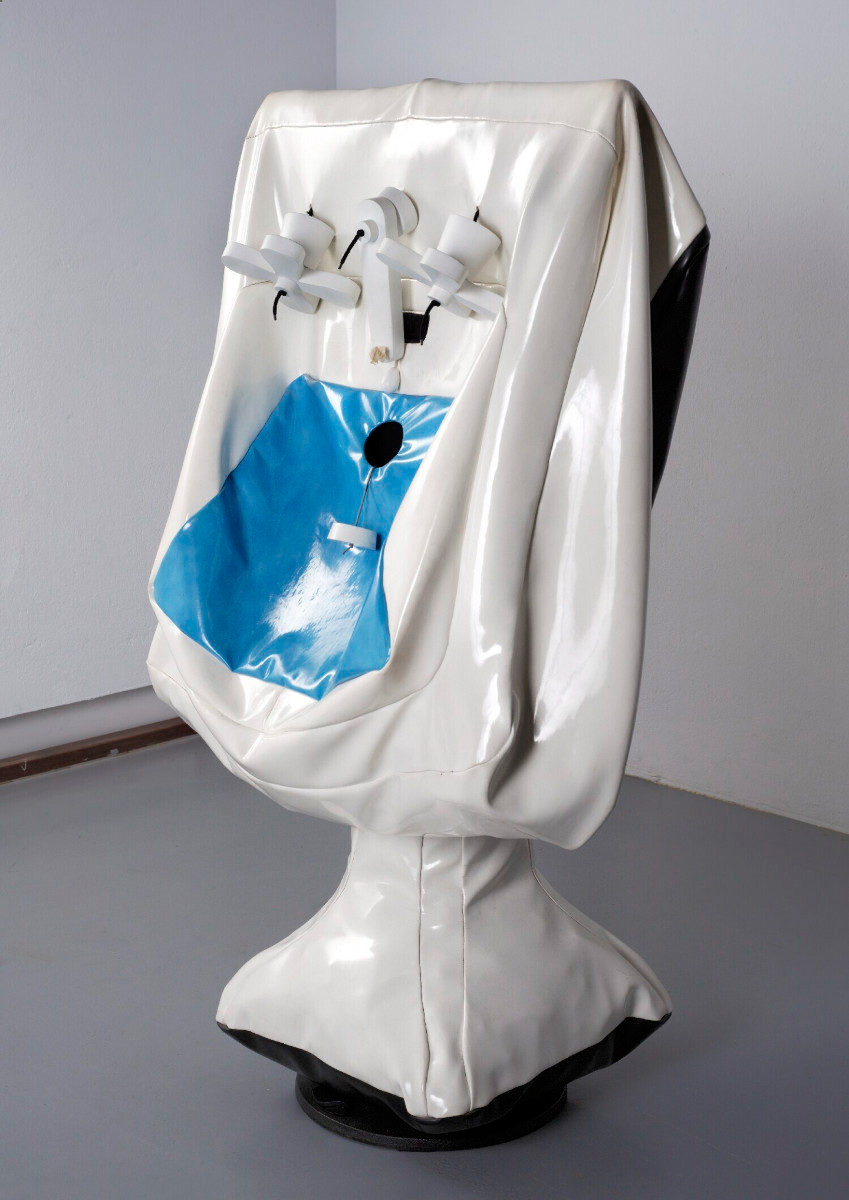 DESCRIPTION
‘Soft Washstand’ is a large sculpture made mainly from white vinyl tarpaulin. It is the soft, flexible version of an old-fashioned washstand. The back is black and the blue piece of tarp represents the water in the basin.

The three colours of vinyl cloth were cut to size based on a pattern and subsequently sewn together to form a large closed envelope. The taps are made of white painted wood and the stopper of white painted rubber. They are suspended with a rope from the vinyl of the basin. The vinyl envelope contains a zipper at the top of the backside so that it can be pulled over the internal metal support frame. This opening can also be used to add stuffing material to the foot and the basin.

Early 1960s pop art artist Claes Oldenburg (Stockholm, 1929) made replicas of consumer goods and food, as artworks and as multiples. They were intended for theatrical performances and for sale in ‘The Store’ (1961-1964): a shop, studio and installation combined into one. There he personally sold art as consumer item. Later his works grew bigger and he started making soft versions of hard objects, such as this washstand.

CONDITION
The condition of this sculpture from 1965 is relatively good. The vinyl tarp is the most important material in this artwork. It has a limited life expectancy. The vinyl surface is in most places still flexible and shiny. At some places on top of the sculpture the tarp begins to turn yellow. As the plasticizers migrate to the surface under the permanent strain of the weight of the hanging basin, the vinyl loses flexibility in those places as well. Eventually it will become brittle and crumble. The sewn seams on the top and the far ends of the zipper experience stress. Small folds, scratches and fractures in the vinyl are formed in various places. Due to warping of the wood the paint layer of the taps fractures.

The condition of the work is monitored regularly. The work was restored a few times. Small tears in the vinyl tarp were treated and cupping paint on the various painted parts was consolidated. The original ropes that hold the taps have been replaced.

Exhibition and Storage
The work is stored in a bespoke wooden crate. The strain caused by the weight of the basin is relieved by supporting the sculpture with a wooden bar in the crate, covered with foam and Tyvek. It would be an option to store the object sealed in a non-absorbing barrier material such as glass or polyester to avoid evaporation of the plasticizer.

On exhibition the artwork holds great appeal for visitors. With its flabby shape and recognizable representation it is tempting to touch the work, open the zipper, and also, unfortunately, dump garbage. Options to avoid touching are physical barriers, additional surveillance, and monitoring with motion detectors.


RECOMMENDATIONS FOR PREVENTIVE CONSERVATION
Click on the plastic for preventive conservation recommendations.