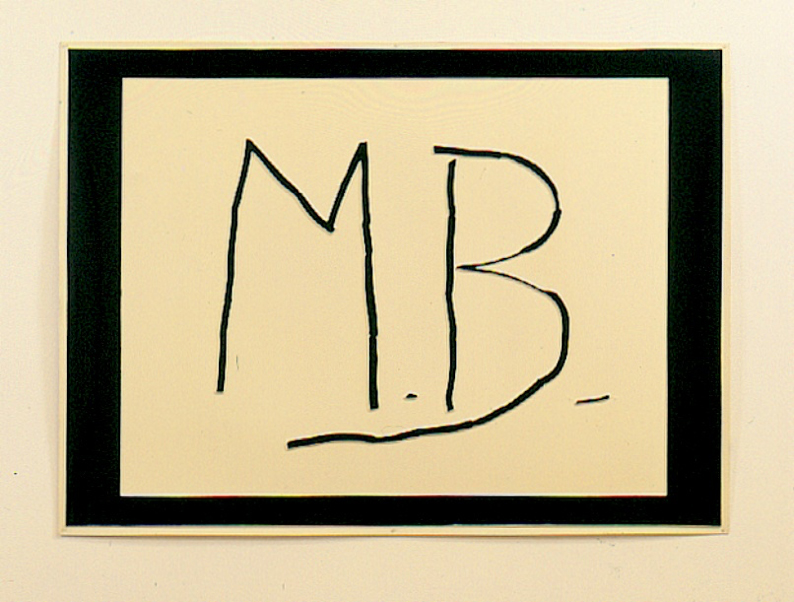 DESCRIPTION
The artwork ‘M.B.’ is one of the works within the oeuvre of Broodthaers in which his own initials are the subject. The work consists of two rigid plastic plates in which the letters M.B. and a broad border are printed in relief by vacuum forming (plastic sheet is made flexible with heat and shaped over a mould with vacuum pressure). One plate is painted black completely, probably before vacuum forming. The other plate is white with the high relief letters and border painted black. The two objects constitute one artwork. They belong to a 1-second film that shows placing the signature.

Marcel Broodthaers (Bruxelles, 1924-1976) is a poet and conceptual artist who is self-reflective and critical of art. With humour, poetry, and a critical view he studies the status of artworks in various contexts, amongst others by using words and texts that refer to the museum as an institution or the exhibition as phenomenon. This particular work is about the application of economic principles in the art world, more specifically ‘the signature of the artist’, as proof of authenticity. Broodthaers made a series of these vacuum formed plates, completely or partly painted and mostly in black or red.

CONDITION
The work was acquired in 1987. The plates are cut from a larger sheet. During vacuum forming the material may have rested not entirely flat on the mould which caused a fold. The creation process may influence the stability of the material. In places where the shape is formed the polymer is more sensitive to tearing. The artwork is in fair condition. The material of the white plate shows discolouration, this may become disturbing. The paint around the letters shows craquelure. The sides of the plates are somewhat deformed. In 2016 the work was restored, a tear in the black plate was treated and a broken corner of the white plate was filled and lined from the back.

Exhibition and Storage
The work was meant to be hung as simple as possible, without a frame, on nails through the holes. Museums generally use screws for this purpose. The two M.B. plates have 6 and 8 holes respectively. The method of hanging has already caused the start of three fractures and the partly painted plate is no longer flat. Due to their vulnerability after fifty years, the plates are now loosely screwed into box frames. In these black frames they can be exhibited vertically and stored horizontally. This reduces the period of stress to the hanging points to the duration of exhibition.

During storage the plates lie horizontally in their box frames. Since contact with metal could accelerate degradation of the plastic, small rings of silicon rubber have been placed between the screws and the plates. The plates are monitored regularly for further deformation.


RECOMMENDATIONS FOR PREVENTIVE CONSERVATION
The material of the artwork was analysed during a research project in 1997 with FTIR as acrylonitrile styrene acrylate or acrylic styrene acrylonitrile (ASA). This is a plastic from the ‘styrene-acrylonitrile’ family, which also includes ABS and SAN. They are all co-polymers that contain polystyrene (PS) and acrylonitrile. (van Oosten, T., Keune, P., The Technique of Vacuum-forming, Modern Art: Who Cares, 1999, p.124, editors: Hummelen, IJ, Sillé, D.) See: Styrene Acrylonitrile (SAN) The tool does not distinguish between all the styrene-acrylonitrile co-polymers because it is difficult to tell them apart. Their properties are quite similar and they require the same storage conditions. Recommendations for preventive conservation are the same as for SAN.