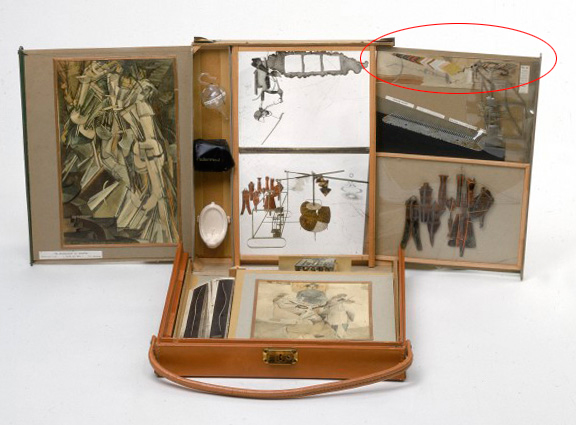 MATERIAL
Box in a leather suitcase with miniature replicas and colour reproductions of Duchamp’s work; with a drawing mounted in the top of the suitcase.

DESCRIPTION
The artwork consists of a leather suitcase which shows, when opened and with frames slid out, a small exhibition of Marcel Duchamp’s work in 69 miniature replicas and reproductions of earlier work with the addition of one original drawing which is attached inside the lid of the suitcase. The contents are not presented in a linear order, as is done in a book, but La Boîte-en-valise simulates the horizontal and vertical axes of a space, represented to scale. Duchamp’s artistic concepts and works are presented by the artist himself as a carefully arranged unit. The work of the Stedelijk Museum belongs to the first series, assembled between 1941 and 1949. In the following years another six series were put together, each varying slightly from the others. The last two series differ the most as they contain eighty parts.

Marcel Duchamp (1887-1968) decided at the beginning of the twentieth century to stop making art in the traditional way. He even went as far as signing consumer goods and declare them artworks. The ‘ready-made’ was born, an event that had an enormous impact on the development of modern art. It questioned the meaning of an ‘original’ artwork. The suitcase full of reproductions, a portable exhibition, adds another layer to this discussion.

CONDITION
The original work Glissière used to be attached to the wall with an iron hinge allowing it to move. In La Boîte-en-valise Duchamp wanted to create the same mobility. Therefore, the miniature version was adhered with transparent tape to the top of the right-hand sliding panel. The film that was used for the miniature began to warp soon after creation. Therefore, only in this particular work, Duchamp fixed the miniature with a metal wire. Due to its warping the artist decided to leave this miniature out in later editions. Duchamp writes about this in 1961: ‘I hadn’t be able to keep the celluloid flat, and when they were mounted in the valise the whole sliding mechanism of the tirettes became impossible […] So I decided to leave it out […] I destroyed the packet of nearly two hundred celluloids’ (cited in Bonk, 1989, 208). In the artwork of the Stedelijk Museum the deformation of the film got worse with time and obstructed the sliding of the panel in its frame.
In discussing the problematic production process of the miniature Glissière Duchamp mentions celluloid as the basic construction material. Strictly speaking this refers to cellulose nitrate. It is likely that he used the term in a broader sense, as analysis proved the material to be cellulose acetate.

Exhibition and Storage
The suitcase is stored closed, however, due to its deformation, the cellulose acetate panel is not slid back but stored separately. The suitcase is stored in a lined box. The museum is considering to store the most vulnerable plastic parts in a low oxygen atmosphere if possible.

The suitcase is exhibited in open position with the various parts either in the suitcase, extended, or placed next to it. Recommendations for preventive conservation are aimed at the most sensitive material; the cellulose acetate in the frame. This means limited exposure to light and UV by reducing both intensity and duration of exposure.


RECOMMENDATIONS FOR PREVENTIVE CONSERVATION
In this artwork the cellulose acetate part is probably the most sensitive. CA is a problem plastic. Click on cellulose acetate to find recommendations for preventive conservation. (The paint used on the film may require specific conditions.)