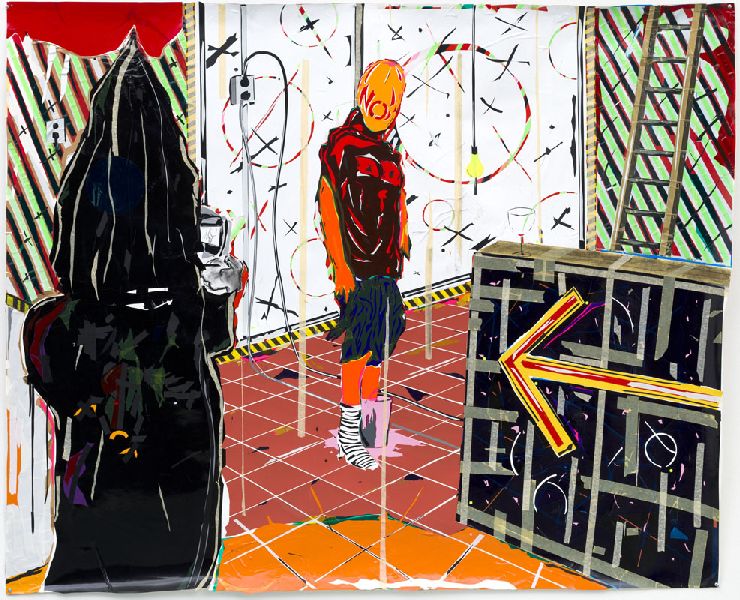 DESCRIPTION
The artwork ‘Photoshoot’ shows a central figure with one foot in a bucket filled with pink paint in an undefined space. A photographer, entirely black, shoots photos. The two-dimensional work is something between a ‘drawing’ and ‘graphic design’. It is made of manually cut pieces of self-adhesive plastic film and tape, applied in layers over one another. The work is presented attached to the wall with clamps.

Thomas Raat (Leiderdorp, 1979) paints with tape. He applies it as lines on paper while he uses self-adhesive plastic film for figures and shapes. Raat uses newspaper photographs or television images as starting point for his ‘paintings’. The cheerfully coloured plastic shapes and lines have an alienating effect on the often ominous images. The large format of his works requires the viewer to take some distance to see what is happening and to experience the dynamics. Sometimes the lines run from the centre out of view and the plastic clippings flutter in between as is an explosion has taken place.

CONDITION
The work is in good condition. It does not have a rigid support, solid frame, nor a proper hanging system. It hangs unframed. The many layers of cut-out plastic film and tape on top of each other do not form a stable combination. The work will constantly change its shape a little. The adhesive layer of the plastic film remains flexible while the glue layer of some of the tapes ages relatively rapidly. The PVC film itself will change size due to the emission and evaporation of the plasticiser. As a result of its shrinking the edges of the film are covered by the glue layer. Dust and dirt can settle easily but are hard to remove. Air pockets can form under the different pieces of film, causing displacements. Thomas Raat cuts the film in shapes and strips. Where these are narrow or a pointed tip they will curl and detach the soonest.

Schunck is the first owner of the artwork and it has not had restoration treatment yet.

Exhibition and Storage
Until January 2013 the work was stored attached to a paintings rack with paper clamps. When the bottom edge started to curl, it was decided, in consultation with the artist, to store the artwork sandwiched between two Kapaline foam boards. He preferred not to frame it or place it in a box frame. In November 2016 the Stichting Restauratie Atelier Limburg advised to place a sheet of Melinex lined with silicone between the front of the artwork and the Kapaline foam board to avoid pieces of plastic film and tape sticking to it in due time.

In exhibition, the artwork is presented attached to the wall with clamps.


RECOMMENDATIONS FOR PREVENTIVE CONSERVATION
The polyvinyl chloride in this artwork is a problem plastic. Therefore it is best to follow the recommendations for PVC unless those for cellophane are stricter (RH set point).